Amigene is a New Zealand sporting representative who needs no introduction to the people of Cambridge.

She played Touch and Netball for Waikato for 12 years as well as being involved at international level.  And as a junior, she also represented New Zealand at athletics as a sprinter and long jumper – winning a medal at the Pan Pacific Games in 1988.

Her list of achievements in both Touch and Netball is outstanding.

She was a member of the New Zealand Touch Team between 1994 and 2003.  During that time she played in 3 World Cups, 2 as Captain, and was runner-up 3 times.  She held the record number of Tests as Captain of the Women’s Touch Blacks (35 out of the 47 played).  She captained New Zealand to their first ever win over Australia in 2001, and was voted Player of the Series.

She was recognised as New Zealand’s best women’s Touch player and one of the best in the world for much of her international career.  Such was her standing that she was inducted as one of the first four players to receive the Service to New Zealand Touch Award in 2004.

Amigene is now the Head of Sport at St Peter’s School in Cambridge where she continues to coach and support netball teams.

It is an honour to induct Amigene Metcalfe into the Cambridge Sports Walk of Fame. 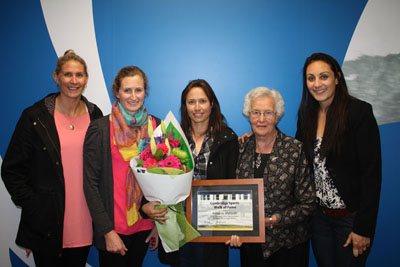 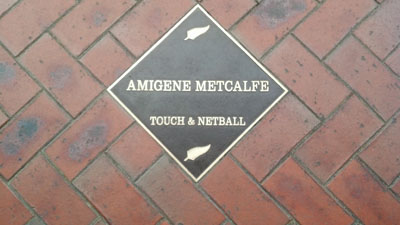