The largest netball club in the Waikato has received top honours at the Blues Awards this year.

Three major awards, the Coach, Team and Club of the year all went to the University of Waikato Netball Club.

Rebecca Gabel received the Coach of the year award with the Team award going to the Premier Team.

The Blues Awards are one of the University of Waikato’s most prestigious awards and one of its strongest traditions.

Rebecca Gabel has coached the Premier Netball team since 2009 and has an impressive six consecutive Premier titles in the Hamilton City Netball Competition under her belt.

“The University of Waikato Premier team boasts a remarkable track record and has instilled a strong culture of excellence. “

“The majority of the players in the Premier team are involved in reps, from U19s through to NPC level and are aiming to reach ANZ level in the near future.   In fact Elsa Brown, who has been part of our Premier team for the last 5 years has been signed to play for the Northern Mystics in 2015, and we are all extremely proud of her.  Sir Edmund Hillary Scholars who play in the Premier team include; Caitlin Easter, Amy Christophers and Tamsin Moala as well as Tiaan Taylor who is in the Premier Reserve team. 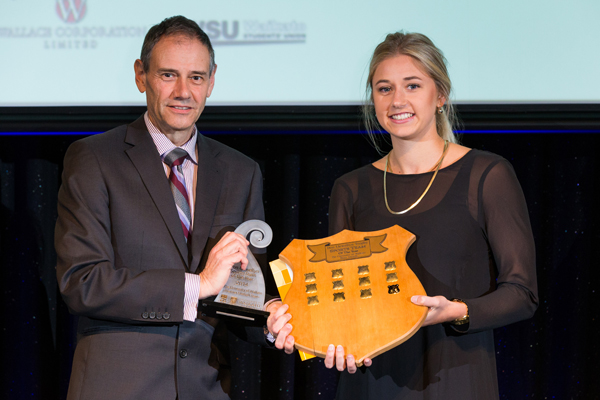 About the Waikato University Netball Club

The club committee has been working hard behind the scenes towards the long term goal of having a netball academy within the University of Waikato.

The club is able to cater for all levels of ability, with four competitive teams, two social teams and a team made up of older graduate students from the University.  All players that attend trials are placed into a team.

Premier players are encouraged to give back to the club and four players currently coach or manage lower grade teams.  These coaches are given support by the Premier coach who mentors and helps to develop coaching skills.

Rebecca is part of the Performance Coach programme under Netball New Zealand and works hard to develop and enhance her coaching.  Rebecca has also been a successful coach with the Waikato NPC team and Hamilton City NPC team, both teams coming runners-up at the national tournament, most recently in October 2013.  Rebecca also offers her support and helps to mentor younger coaches within the club.