Waikato Bay-of-Plenty (WBOP) Netball stalwart Jan Teesdale will leave a netball legacy that covers most areas of a game she has had a life-time association with.

Teesdale is set to retire from WBOP Netball following decades of giving back, although she is not ready to sever all her netball ties and will continue in a mentoring role with High Performance umpires at ANZ Premiership level and international games.

“Jan has been instrumental in the development of many umpires in our region and has contributed significantly to netball in the Waikato-BOP Zone,” he said.

“Her ability to connect with others has been influential in her various roles within netball and she is such a positive role model for the next generation of umpires.  We wish her well in her retirement.”

The former New Zealand and Waikato netballer, who steps down on 6 January, was recognised for her contribution to Waikato-BOP netball at a recent function in Cambridge where the umpiring fraternity presented her with a white Korowai with gold thread weaved through the top (meaning Royalty) along with a pair of greenstone earrings.

Following on from a successful playing career – which included representing Waikato and the New Zealand team which travelled to the Pacific Islands (1971) – Teesdale gave her time as a coach and then in administration where she was a member of the Waikato Association Management Committee for 10 years, as a committee member and then as President.

But it is in umpiring where she has left an indelible mark in the Waikato-BOP region.

Since gaining her New Zealand umpire badge in 1985, Teesdale’s commitment and expertise to the role has been recognised with honours as a national and international umpire.

After hanging up her whistle as an active umpire, she was called upon by Netball New Zealand in 2001 to act as the National Umpire Co-ordinator and the National Umpires Squad coach.  This required plenty of travel and time at national and international events, but Teesdale still managed to give her own time as a volunteer at local and regional events in the Waikato.

But her peers in the Waikato-BOP region believe it is Teesdale’s mix of experience and enthusiasm along with her willingness to give time and endless encouragement she offers others, sets her apart as such a positive role model. 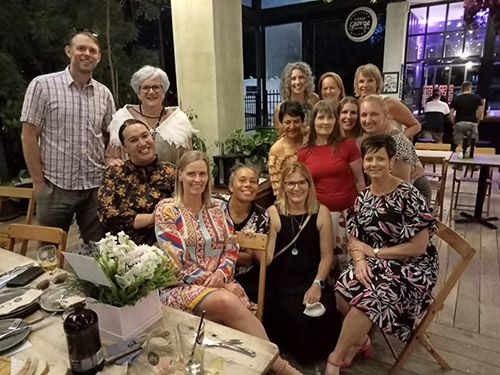